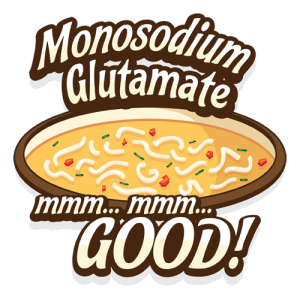 It’s in chips, crackers, sauce, sausages, burgers, bacon and Chinese chop suey. It’s in you and it’s in your grandmother, if she’s still alive. I’d like to claim it’s not in me but hey, I’m not perfect.

Mono-sodium glutamate. Better known as MSG. Or, as it’s referred to on the packaging of that processed rubbish you’re hoovering, “flavours”. The magic ingredient that earned the mastermind of KFC’s secret “herbs and spices”  his millions.

We all know what it is, and that it’s not good. But most of us don’t give a crap because it tastes so good. It’s what keeps us grabbing more Rashuns/Burger Rings/wasabi peas or piling up our plate up at the Chinese smorgasbord. The more we eat, the more we want. And the fatter we – and Colonel Sanders’ wallet – gets.

So that’s my beef with MSG. Long term, there isn’t any evidence of what it’s doing to us,  but I think we just need to look at the general shittiness of Western health to get our answer.  Every second kid has ADD/ADHD/ADwhateverelse, their parents have heart disease and/or high blood pressure and/or high cholesterol, the rest of us are fat or depressed or both.

Oh, it’s definitely not all Mr MSG’s fault. He’s just one of the many, many players in a big game of What’s Wrong With Modern Life. But he’s up there with Tiger Woods and Lance Armstrong.

Until a few years ago, sushi was this amazing exotic dish that EVERYBODY in Hollywood was  eating because it was so DELICIOUS and so HEALTHY.

And if the sushi-stuffing svelte Gwyneth Paltrows and Sandra Bullocks of the world aren’t evidence enough, surely we only need look at the entire Japanese population; all taut skin and shiny hair and cancer-free. Sushi must be frickn good for you, yup.

But perhaps for fear of shocking our fish-and-chips-clogged arteries by missing out one of the macronutrients, we Kiwis take those little packages of seaweed and sticky rice and raw fish and plonk them in a deep-fryer.

I used to work in an office where the ever-dieting women would exult over their plans to run to the Japanese takeaway next door. They’d return, clutching plastic boxes and chopsticks, and proudly chow down on …..crispy misshapen lumps of yellow batter.

Alright, so we’ve got white rice. Bad because it’s nutritionally devoid of vitamins, minerals or fibre – when the brown husk of the grain has been stripped away, you’re left with sweet F all.

Then there’s the all the crap they mix in WITH the rice and egg and tuna and whathaveyou. Soy sauce is loaded with sodium, mayonaise is loaded with sugar and fat, and let’s not even talk about MSG.

No; the nutritional benefits of that sliver of salmon/seaweed/avocado tucked within your battered bullshit will NOT balance out the damage.

Don’t get me wrong. Sushi – the way the Japanese would eat it – is a near-perfect meal. Carbohydrates, Omega-3, a few vitamins and minerals. Infinitely better than a pie.

And guess what? It’s THERE alright, usually right on the shelf right next to the lard-laden stuff.

Make it easy on yourself. If it’s a heart attack on a plate you’re after, get that pie. But do NOT tell me you’re eating “healthy” today whilst sticking your chopsticks into a golden cube of trans-fats.

So, I’m a vegetarian. I absolutely refuse to let chicken, beef or pork get anywhere near my mouth or my tofu. Weird, because growing up on a farm, I was eating meat and three veg for dinner most nights (unless we got Chinese, which I will not refer to as meat or even anything remotely close to food). Then, at some point, I joined Greenpeace and got all angsty about pigs in pens and the thought of eating a once-squawking/mooing/oinking animal turned my stomach.

But, I friggin love sardines.

Sardines are, by many accounts (which I will not annotate because nobody’s grading me) one of the richest sources of Omega-3 fatty acids. Those are the GOOD FATS that help your cells do their  job smoothly, help decrease inflammation, keep your brain working, reduce BAD cholesterol, and generally contribute to overall wellbeing. Did you know that two-thirds of our brain is made up of fat? We kinda need to keep feeding it good fat to keep it running well, like putting petrol in a car.

Sardines are also a good source of protein, vitamin D and vitamin B12 (both needed for HEAPS of other metabolic processes), plus phosphorus, niacin, vitamin B2 and vitamin B6. All good stuff that our bodies need to function.

The bad? Well, they smell. But you get used to that. And, obviously, don’t eat them if you’re allergic to fish.

Otherwise, rip that lid off and dig in. On toast, they’re pretty near perfection. 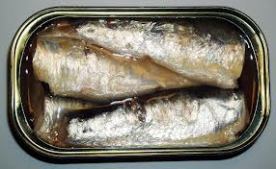 Posted in Uncategorized | Tagged heaven in a can. | Leave a comment

heaven in a can.

let food be thy medicine…

And medicine be thy food. Or so Hippocrates said.

Today I saw a fat kid waddling out of Pak n Save behind her equally fat mother and father, guzzling a 600ml bottle of L&P. Dinner, according to Ma and Pa’s trolley, would be white bread, battered sausages and chunky-cut chips.

I’m all for treats. I like starchy carbs and shiny yellow fat as much as the next (wo)man. I have a disgusting weakness for surimi. But if my gut were to start bursting out of my shirt or my hips muffining out of my jeans, I’d consider taking a break from the pseudo-crabmeat for a while.

We’re all guilty of nutrition apathy. We just breeze on through each meal and forget what we’re really stuffing in our faces.

Food fascinates me. Diets fascinate me. Additives and chemicals and toxins, they give me the shits. Sometime literally.

So, herewith is my attempt to investigate and demystify what’s really in the shit we eat. That I eat, that you eat, that the fat kid waddling out of Pak n Save eats.

And where better to begin than with…